The Old Blackford County Jail is an interesting place. You can tell that it’s a building that has had to adapt to the changing times. The exterior is a beautiful representation of 19th century architecture, the kitchen seems unchanged since the 1940’s, the jail itself seems both historic and vintage as it was built in 1879. The jail has one of the few remaining turnstiles left in the nation and looking at it, it is easy to imagine an unsavory character standing just beyond the bars.

As mentioned in our previous post, there’s an entire page of the Jail’s website dedicated to EVPS, many of them shockingly clear. We hoped to find some good evidence of our own and were not disappointed.

At one point in the night, I felt some whisper straight into my ear in the kitchen. Kristin experienced someone touching her arm in the jail. While thrilling (and admittedly scary) experiences to have in the dark, these kinds of personal experiences don’t make for good evidence. Luckily, we got some good EVPs too.

We’re curious to know what you hear. Kristin and I were playing War on a picnic table in the jail. Visit our Facebook Page to see the discussion surrounding what we our thoughts were.

This one creeps me out because clearly we also heard it real time! We looked all around after hearing it, and there wasn’t anyone else nearby. 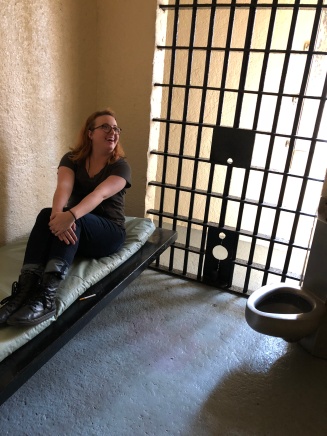 The Old Blackford County Jail is a popular paranormal hotspot in Hartford City, Indiana. Many investigative teams have stayed the night, including several TV crews, and none, it seems, have left disappointed. The evidence page on their website is teeming with unsettling EVPs (each credited to the team that found it), some of which are startlingly clear. If you’re looking to spook yourself, put on a pair of good headphones and listen to the EVPS here. Seance Sisters and the Friday Night Paranormal crew will be investigating soon and we hope to find our own evidence.

History of the jail has been a little tricky to unearth. So much of it is presented within the context of his hauntings that it has been hard to find a completely objective report. The location does historical tours for locals during certain times of year and the proceeds go to continue with it’s preservation.  The Old Blackford County Jail website basically only gives the following information:

I also found a page by the Ghost Research Society  which claimed that no one ever escaped from this jail due to it’s granite ceilings, floors and walls, each of which was 8ft thick.  You can see their findings here.

I’m curious if the granite used to secure the jail could be contributing to it’s hauntings via the Stone Tape Theory.  While not exactly scientific, this is a popular ‘theory’ in the paranormal community that supposes that certain rocks such as quartz and limestone, can have the ability to ‘record’ traumatic events or heightened emotions. This would account for residual hauntings (hauntings that occur at regular intervals, with the same occurrence: seemingly non-intelligent and habitual). The stones are simply replaying events that somehow had their energies recorded in them. While very interesting, there is little verifiable science in involved.

We’re curious to find out ourselves! It seems that we are very likely to have some kind of experience here. Wish us luck and keep a look out for our post-investigation follow-up!

(Author’s Note: As we will be talking about an investigation at a private residence, I will be using pseudonyms when referring to the family and will not be giving out location specifics to respect their privacy.)

Earlier this month, Kristin and I (and her parents who make up the rest of The Friday Night Paranormal Team) headed up to La Porte, Indiana to investigate a private residence there. It was a beautiful day for early March: A perfect day for a road trip.

Lori Smith* and her teenage son, James*, live in a small, two bedroom house built in 1950. When we texted Lori and asked her to describe what was occurring for her in the home, here was her response:

“…I have things disappearing right in front of me.  I hear voices shadows I can just feel a  presence…. Im wanting to know if I need a priest lol     One day in the back bedroom I just felt something evil looking at me from the door way I had to rebuke it in Jesus name. I think they are having a party in my basement always knocking stuff over heard a crash one day and found laundry soap all over the floor”

In addition to the phenomena they had experienced themselves for many years, the previous residents also had believed the place to be haunted. It should be noted that it is possible that this home is built on what once was Belle Gunness’ farm. The residents believe it to have been, and while we were not able to find a map that shows where her property lines were, it seems likely. Where her house stood is not very far from where we did our investigation, especially considering that her farm was supposedly large.  Does this have anything to do with the experiences the Smiths were experiencing? Maybe not. Once our evidence has been combed over, perhaps we will have better insight.

This presented a very special opportunity for our team as we would be able to not only be the very first team to ever investigate a location but we could also help bring peace of mind to the family that lived in the house.

Once at our destination, we were greeted by Lori who immediately told us that not long before we arrived she had heard a loud thud  coming from another room. After a short search, her and her son found a water bottle lying on the kitchen floor. They had several cases of water stacked in a tower against the wall but they only had small openings in the top package for the bottles to be pulled out. It was not possible for a single bottle to just fall out out of stack. Intrigued, we quickly went to work photographing the house and setting up our surveillance equipment. Our initial walk through with our Mel EMF Meter with temperature revealed that the house had completely ordinary levels of EMF.

However, from the moment we started, our equipment acted in ways it never had before. The K2 and the Mel Meter went off to various degrees while sitting perfectly still in one spot. They were unpredictable for the duration of the investigation.

I have been on six investigations with Friday Night Paranormal and every time we’ve set up the REM-Pod in a different room, I have been completely and utterly filled with dread that it might actually go off. It never did. Not once in six investigations, many with lots of other activity, had the REM-Pod ever gone off in a room I was not in. But at the La Porte House, it went off constantly.   That high pitched, spaceship-esque squealing of the REM-Pod went from being an unimaginable surprise to the constant soundtrack for the night.

While the REM-Pod went off a lot in the kitchen, once we placed it in the hallway, it went off almost constantly. During this time, our other equipment picked up fluctuations in temperature and EMF.

Our team is still reviewing all of our footage and listening to our recordings. Hopefully we will have something interesting to share with you regarding that night in the next couple weeks. Until then, any questions, concerns or comments can go below.

In honor of International Women’s Day, I wanted to a quick write up of one of my favorite serial killers, Indiana’s own Belle Gunness. Belle, a Norwegian immigrant, lived in La Porte, Indiana in a farmhouse where three bodies were found (and several more found on the property itself).   This weekend, Kristin and I will be traveling to La Porte to investigate a private residence with the rest of our Friday Night Paranormal team. It is unlikely that this alleged haunting has any relation to Belle Gunness, but she’s a local fascination and I was thrilled to learn we were going to be in her old hunting grounds. Literally.

Belle was something of a Black Widow.  Biography.com reported “Not long after Gunness married Mads Albert Sorenson [her first husband] in 1884, their store and home mysteriously burned down. The couple claimed the insurance money for both. Soon after, Sorenson died of heart failure on the one day his two life insurance policies overlapped. Though her husband’s family demanded an inquiry, no charges were filed. It is believed the couple produced two children whom Gunness poisoned in infancy for the insurance money.”

These are certainly suspicious circumstances but foul play should have been expected after her second husband, their daughter and her adopted daughter all wound up dead. If it was, Belle was unaffected by the suspicions. She then started meeting suitors via personal ads in a local newspaper that read:

“Personal — comely widow who owns a large farm in one of the finest districts in La Porte County, Indiana, desires to make the acquaintance of gentleman equally well provided, with view of joining fortunes. No replies by letter considered unless sender is willing to follow answer with personal visit. Triflers need not apply.” (Source: IndyStar)

The lure worked and at least 10 men fell victim to the trap via personal ad, however, her total kill count is anywhere from 25-40! It’s safe to say that Belle Gunness was no trifler herself. Could the souls of her victims still wander La Porte? Stay tuned to see what, if anything, Kristin and I encounter this weekend!

A place for the strange and unusual.